Home » PRESS » THE REPORTER 2ND ANNUAL: 20 UNDER 20 – LOCAL STUDENTS MAKING A DIFFERENCE IN OUR COMMUNITIES- JANUARY 2017

THE REPORTER 2ND ANNUAL: 20 UNDER 20 – LOCAL STUDENTS MAKING A DIFFERENCE IN OUR COMMUNITIES- JANUARY 2017

Meet Reporter Newspapers’ second annual group of 20 Under 20 honorees. We asked public and private schools, service organizations and members of the general public to nominate students who are younger than 20 and who have been active volunteers in their communities. Here are our selections of 20 special young people who are doing much to change their world for the better.

As in the past, we are astounded at how much time and effort these students put into their work for the benefit of others. They volunteer for thousands of hours in our local communities, travel to foreign countries, create nonprofit organizations and mentor other students.

We hope their stories will inspire you. 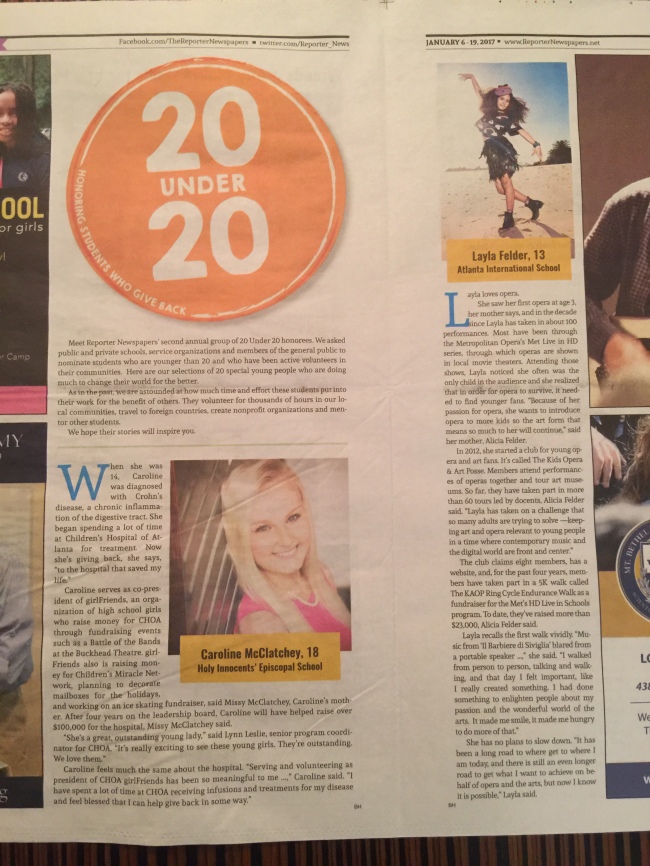 She saw her first opera at age 3, her mother says, and in the decade since Layla has taken in about 100 performances. Most have been through the Metropolitan Opera’s Met Live in HD series, through which operas are shown in local movie theaters. Attending those shows, Layla noticed she often was the only child in the audience and she realized that in order for opera to survive, it needed to find younger fans. “Because of her passion for opera, she wants to introduce opera to more kids so the art form that means so much to her will continue,” said her mother, Alicia Felder.

In 2012, she started a club for young opera and art fans. It’s called The Kids Opera & Art Posse. Members attend performances of operas together and tour art museums. So far, they have taken part in more than 60 tours led by docents, Alicia Felder said.

“Layla has taken on a challenge that so many adults are trying to solve —keeping art and opera relevant to young people in a time where contemporary music and the digital world are front and center.”

The club claims eight members, has a website, and, for the past four years, members have taken part in a 5K walk called The KAOP Ring Cycle Endurance Walk as a fundraiser for the Met’s HD Live in Schools program. To date, they’ve raised more than $23,000, Alicia Felder said.

Layla recalls the first walk vividly. “Music from ‘Il Barbiere di Siviglia’ blared from a portable speaker …,” she said. “I walked from person to person, talking and walking, and that day I felt important, like I really created something. I had done something to enlighten people about my passion and the wonderful world of the arts. It made me smile, it made me hungry to do more of that.”
She has no plans to slow down. “It has been a long road to where get to where I am today, and there is still an even longer road to get what I want to achieve on behalf of opera and the arts, but now I know it is possible,” Layla said.